“Hi,” Susan said, pleasantly swaying gently from side to side.

“What the… what have you been up to?” I ask her, perplexed at how she came to this state.  She scowls and points a finger accusingly, “This is YOUR fault!  YOU told me to take pictures of Southeast breweries for our blog and I did.  But it wouldn’t have been polite to not drink what they offered, so I did!”

We were at the 18th annual Classic City Brewfest and our third.  Athens’ Classic City Brewfest is organized by Owen Ogletree, and the event benefits Athens Area Humane Society.  At the brewfest, brewpubs and breweries from all over- including most of the Southeast- present their beers for tasting and enjoyment by Athens locals and visitors.  Brewfests are a fantastic opportunity to experience a bit of local flavor from your part of the US without having to leave your town.  In addition to beer, CCBF featured several ciders and one mead from Redstone Meadery. 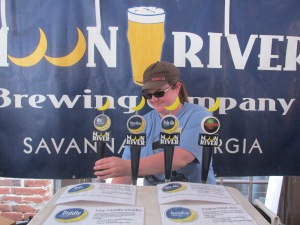 Brewers regularly bring their most interesting and experimental concoctions to brewfests.  At this year’s CCBF, Moon River brewing from Savannah had a lavender stout in the cask ale pavilion.  Moon River representatives said lavender was added to the cask, and was still soaking as it was being dispensed.  Jailhouse Brewing from Hampton GA had a barrel-aged version of their Breakout Stout, which was not commercially available.  In experiencing all of these beers, local flavor of each brewery’s community could be felt.

Susan had tried many- or most- of the beers from the Southeast.  Her conclusion is they were largely pleasant, but with a potential for vengence.  This reminds me of how I feel about southerners.  She learned that pacing with water is essential at a brewfest, and tomorrow may not go well if you sample all the amazing deliciousness the Southeast has to offer.