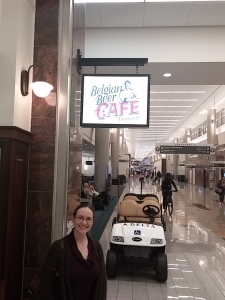 “Belgian Beer” said the auspicious sign immediately outside our gate in the International terminal of the Atlanta Airport.  A pint of Rare Vos later, we were set to begin the journey to Ireland.

We had both been to Ireland once alone and once with each other, for our 1 year anniversary.  This trip would mark our 6 year anniversary, 5 years since our last journey to Ireland.  On our last trip, we had a hard time finding breweries or brewpubs not associated with a major, large brewer like Guinness. Guinness was our first favorite beer, so we didn’t miss our beloved craft beer too much.  Wine seems to be unmade on this island, and the distilleries often did not have tours.  Let’s see if time has improved Ireland’s alcohol tourism prospects.

Our first pints, in the Clontarf Castle Hotel’s Knight’s Bar pub, had to be Guinness and a cider, though they didn’t have Bulmers on tap.  The next day saw us start at Grogans Castle Lounge.  We had heard about the pub from Drinking with Men by Rosie Schaap, who hailed it as a great place for a chat.  That night, and the next time we tried it Saturday afternoon, it was crowded to the point just beyond standing-room-only.  Maybe if you arrived at 10am you could get a spot to have a chat.  After that was JW Sweetman’s in downtown Dublin.  We had been to Sweetman’s previous incarnation, Messr Maguire’s, on our last trip and were delighted to score the same quiet, tucked away spot to have our drinks and meal.  Their Irish Red Ale was a bit hoppy for that style- more like an American Red.  The Weiss was our favourite, with a nice banana aroma and a wonderful creamy mouthfeel.

The next day saw us in what can simply be described as a Wonder of the World- a pub on a college campus.  Maybe they have these outside of the South, but I cannot imagine the outcry if any Southern university were to put a pub on campus.  The Clubhouse at UCD was surprisingly lively, as the quiet and comfy lounge was closed.  Still, the concept is sound- let’s get on this one, America.

Our last alcohol stop was Against the Grain, an outlet of the Galway Bay brewing company.  Their beer was delightful- the milk stout and the wee heavy were absolute stand outs.  We managed to find an off-license (liquor store) which featured several dozen Irish craft beers.  We selected Kinnegar’s porter, Bo Bristle’s stout, Jack Cody’s Samhain, and Dan Kelley’s cider.  Each was quite impressive, rivalling the best American craft beers for their adherence to style and pleasant mouthfeel.  This bodes well for Ireland’s alcohol touring prospects this trip.