The first leg of our journey took us to Blackhorse Pub in Clarkesville, TN. Clarkesville has a terrific downtown, home of Austin Peay State University, surrounded by horrible sprawl. We visited immediately after the flood of May 2010, so most of the businesses surrounding downtown were flood damaged. Fortunately, the downtown region is on a small hill overlooking the junction of the Cumberland River and Little West Fork Red River. The Riverview Inn, while expensive, was the only show in town due to all the damage. The 0.2 mile walk to Blackhorse Pub was a nice bonus. 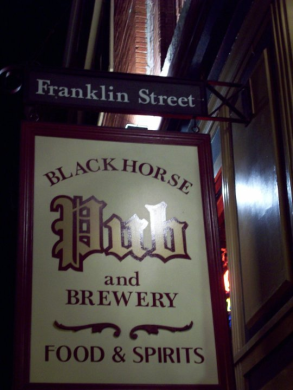 The Pub itself was cozy and relatively quiet, even on a weekend evening. The beer lineup was good without being outstanding. Clarksville itself, though, thoroughly charmed us with the cozy feel of the downtown area, neat local shops, and adjacency to the beautiful riverfront. We’ve gone back a couple of times since that trip, and would encourage anyone who likes cool small towns to check it out. Also try combining some of Blackhorse’s beer; we discovered the Scottish beer to be especially synergistic with their stout!

From Clarkesville, it was on to St. Louis and Kansas City!